At Filestack, we handle millions of uploads monthly for developers around the world.  Developers are storing their files anywhere from their local machines, and or across multiple cloud drives such as Amazon S3, Google Cloud Storage, and Dropbox depending on their needs.  With this data, we’ve been able to draw some pretty interesting trends…

What is the Most Popular Cloud Storage Destination?

Well, it’s probably no surprise to you that Amazon is the clear winner in terms of sheer mass. In 2016, over 95% of files uploaded through Filestack were stored to S3 buckets.

Here is the Breakdown: 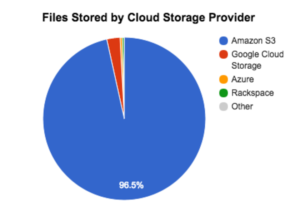 Amazon is Winning – But For How Long?

Amazon’s 95% market share (of Filestack customers) looks pretty dominating, but doesn’t explain the full story.  When looking at year over year growth, we see that although Amazon was clearly the winner for both 2015 and 2016, we saw Microsoft Azure and Dropbox pick up speed at dramatic rates – with a 400% increase in files stored with Microsoft Azure and almost a 200% increase with Dropbox.

Meanwhile, Amazon, while a significantly larger base, only grew at 40% year over year.

Why are Azure and Dropbox Growing So Fast?

While we cannot exactly pin down why OneDrive and Dropbox are growing at such an impressive rate, we do have theories.

1. Microsoft has far reaching relationships with many of the world’s largest enterprises and SMBs. It’s a natural extension of their business to sell their cloud platform into their install base, which includes cloud storage.

2. Microsoft has been in the productivity suite game since 1988, and has become a staple in enterprises all over the globe. As cloud services have become prominent in businesses over the past 10 years, there has been a steady uptick of Office 365 (O365) subscriptions to Office 20xx installations.

3. Cloud storage is getting cheaper. As the price of storage hardware drops, coupled with the economies of scale, cloud storage platforms are aggressively going after data. Many companies, such as Microsoft and Dropbox are offering free plans for general usage, but are also now offering premium “Business” and “Pro” plans that are customizable and more feature rich.

4. Data gravity is real. A term coined by Dave McCrory, as the term suggests, refers to the quantity and speed of data consumed by consumers correlates to the mass of data created.

DN Capital put out an astounding report in 2015, in which they state that 90% of the world’s data has been created in the past two years, and each day, 2.5 quintillion bytes of data are being created daily. With the explosion of mobile and user generated content, there is no reason to expect these numbers to slow.

Google Cloud Storage’s growth is constant – it is makes up 5% of our user base, and is growing at the average rate year over year. Only Rackspace seems to be declining. There was a 30% decrease in files stored with Rackspace this year. This may be a result of Rackspace’s focus on “managed cloud,” where they are offering managed cloud support for other storage services, including Amazon S3, rather than strictly cloud storage themselves.

See all Growth Rates by Platform: 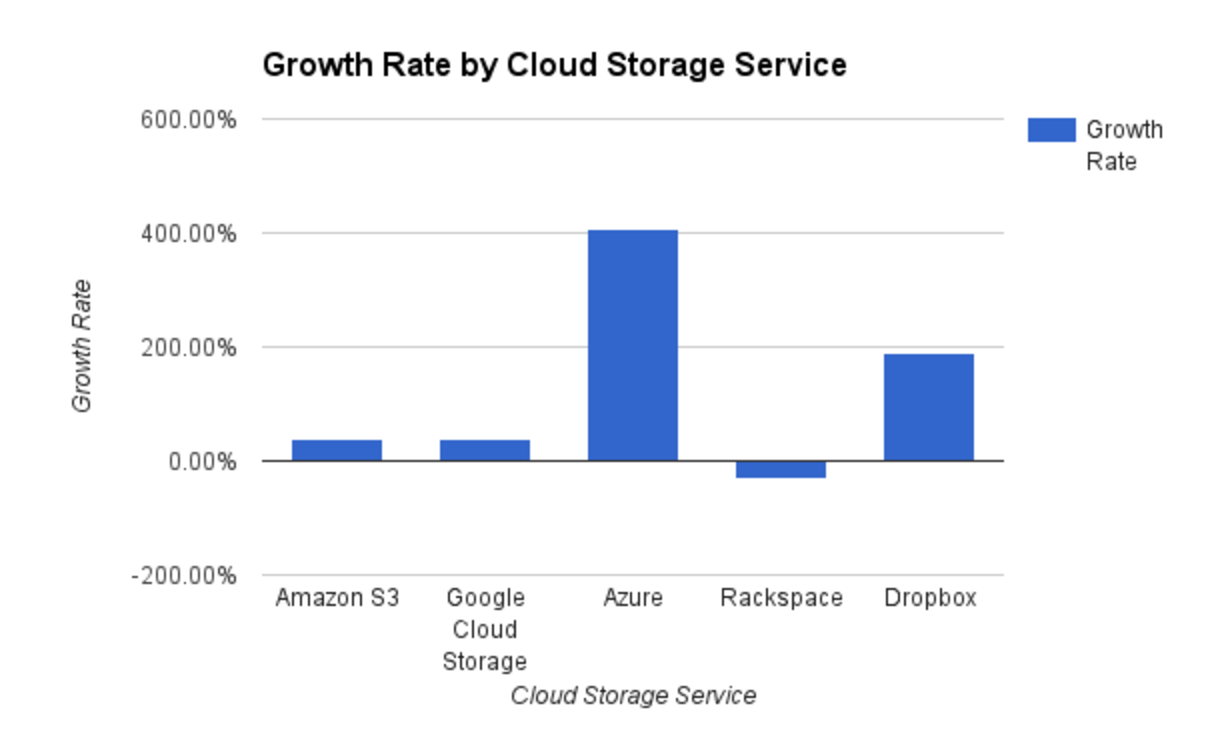 Which Cloud Storage Platform Should You Use?

While I will preface that your cloud storage choice is unique to your specific use case, I will say that Filestack itself chooses to use Amazon Web Services. We chose Amazon because when it comes to uploading files they have more features available. Amazon has the largest file size limit (5TB), they support multipart uploads and resumable uploads, and they are in the most locations. This allows us, as a file uploading API, to support reliable, fast uploads for all of our users.

One of the great things about using the market leader is how many integrations are available for it.  The Amazon Partner Network has some pretty incredible options available only to AWS users. With 96% of our users using Amazon S3, we always develop features for S3 first, and then add others, to keep as many of our users happy as possible.

For example, in the next release we are adding direct to S3 upload capability. This is a big step in addressing markets that have data sensitivity concerns. Direct to S3 will allow users to upload files directly to S3 buckets and bypass the need to pass though Filestack infrastructure. We’re excited for this release as it’ll increase privacy, upload speeds, and add more redundancy to customer uploads across the globe.

At the same time, I would not think of AWS as the “only” option. Other storage services may be better for other use cases and  we’re actively developing this capability for other major cloud storage providers as there is not a one size fits all solution. We want to ensure we’re providing this capability for customers no matter what cloud storage platform they are using to power their business. For example, if you use Google’s computer, you probably want your storage close by. Or you may want to backup your data at another provider. Especially in tech, trends can change quickly, and the leading cloud storage provider of today will not necessarily be the leader of next year.