Over the past couple of months, we have seen a steady increase in conversations with drone specific prospects at Filestack. Purely looking at demand signals, it made sense to come out to learn more about this booming industry at one of the top billed drone events in North America, Interdrone 2017. What would a file uploading company gain from going to a drone conference you may ask?  A LOT.

Drones are creating incredible amounts of data, usually consisting of high quality video and/or thousands — sometimes, millions — of images in any given week. There was a seemingly endless amount of companies and service providers that were focused on the gathering (creation) of data captured by drones, but there was a heavy imbalance to companies whose sole business was to help make sense of the data and provide actionable insights.  I was very impressed with Dronifi, AeroVironment, and Propeller as they seemed they were really honed in on not only data collection, but also analysis, insight, and action as two of my first few questions to everyone I spoke with was, “once you collect the data, where does it go?  What do you do with it?”  I was surprised to find many people simply said their data goes to “the cloud,” others were a bit more specific and said SD cards or on-board storage. I quickly following up with, “how are you getting it to the cloud?” if they mentioned cloud based services.  Many companies I spoke with have incredible services based on the information drones collect.  Before any of these wonderful tools are put into play, the data has to be transferred from point A (typically SD card) to point B (cloud storage).  There was a handful of platforms that offer desktop applications where storage in the cloud only came into play for accessibility, but a good majority of the drone service providers had all their magic in cloud-based applications.  After no more than five conversations, I knew we found a major pain point, and service providers did not hold back in their disdain for managing upload infrastructure and dealing with failed uploads and ingestion errors. 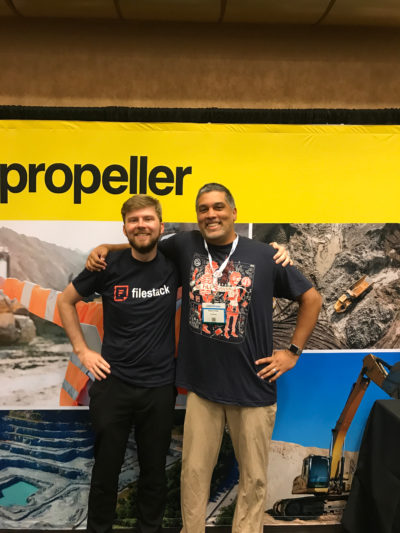 I’ll be the first to tell you, I am no drone expert.  I have crashed every drone I have ever owned, or bought for my step-children.  I do not own a hobbyist drone, yet.  I am not a certified pilot, yet.  I had the opportunity to learn how to get certified and received numerous tips from a very welcoming community, so my wife thanks you all in advance for the money I’m about to spend.

In my research on the drone industry, and based on conversations with drone service provider prospects at Filestack, I figured Precision Agriculture  would be the dominant topic.  I was wrong.  While Precision Ag was what brought many drone start-ups to market, it was clear to see it was not the only path to revenue.  I spoke with over 50 companies at Interdrone, and I found drone use cases covering a variety of industries:

From 2-person shops like OttoFly building drone SDKs and APIs, to 100+ SMBs like Precision Hawk playing in the hardware, software, and consultation space, and Memery investigating taking a consumer-based application into the commercial space, all the way up to 100,000+ Enterprises (Hello, Intel!), everyone is getting in on the drone action. If you have not heard, or seen the Intel announcement about their new Insights Platform, I highly suggest checking it out.  This sounds like a very powerful platform that *will* help make drone data actionable, and I’m excited to see how it is rolled out and what Intel brings to market.  Early indications are late 2017, early 2018 for an official launch of the Insights Platform.

I now know what it’s like to be a non-techie at a tech conference.  So. Many. Acronyms.  I was hearing stuff I had never heard of before.  Through a lot of conversation, I polished up my drone game a bit, and learned some pretty interesting details about various companies.  I asked in advance if it was OK to share these tidbits, and I did receive approval.

I learned a lot, and am walking away from this conference knowing we’re about to help a lot more drone service providers take data ingestion off their plate.  They are building amazing software, and managing uploads is not something they should be spending unnecessary cycles on.  If you haven’t had a chance to see the Filestack suite of services that we offer to drone service providers, check out our drone file optimization page.  While you’re there, we have published our Intelligent Ingestion whitepaper that goes into detail on how we eliminate network, geography, and device barriers when it comes to uploading files from anywhere in the world.

It’s free to get started, sign up here and let us know if you’d like to test with our advanced uploading features.  We’re happy to work with prospects on finding the right fit at the right price, so please do not hesitate to reach out if you have any questions!